I decided to make a dedication for the website (the Votive bronze plaque), as well as update the look of the front page, making it more conducive to wide screen monitors.

This is translated into the full Latin:

In English this means:
To the gods of the dead
Markus Aurelius Montanus
Made this for the memory
of his comrade
Valerius Grapa
for he was very worthy

In essence the website is dedicated to the soldier (Valerius Grapa) who once wore/owned the late Roman Helmet which is featured in the Helmet Fragment & Shield Items section and is visible in the back ground on the front page left side. Valerius very likely gave his life for Rome and its attempt at survival in the turbulent late 4th, early 5th Century.

The addition of the collage of emperor busts, take from some of the coins in my collection also represents in my opinion some of the bright lights in the late empire and some of the dim ones.

I do feel that Julian II, Eugenius, Joannes and Aurelian were the bright lights. All of these men either supported a polytheistic or freedom of religion for the empire (instead of Christian or die), saved it from barbarians or attempted to reform it to save it. Sadly they all failed for various reasons.

Perhaps controversially I feel that Constantine, Valens, Theodosius and Justinain were the dim ones. Not that there were not others, but these ones are well known and in my opinion had significant negative impacts.

1.) Constantine: I feel that Christianity played a roll in the fall of Rome (and civilization), hence in part why he is on the list. I also feel he was a power hungry despot who took the empire saving system of rule under Dioceltian and turned into a one man rule, killing family friends and all rivals in the process through a costly civil war. Not exactly a model Christian to say the least.

2.) Valens: Lost the entire elite Eastern legion at the battle of Adrianople, didn't wait for Gratian out of self interest and essentially set the stage for the Barbarians from within and the reliance on them for troops (see Theodosius).

3.) Theodosius: Responsible to suing for peace withe Goths, incorporating them into the army, wiping out the whole Western army of Eugenius (setting the death knell of Rome) and instead sticking his incompetent 8 year old son there instead (Honorious). Theodosius was also responsible for making polytheism illegal, and the burning of the Library of Alexandria. The loss of this facility of "Science" certainly helped the "Dark ages" cometh.

4.) Justinian: Although he had some good aspects, I believe some of the negatives are over looked. Most notably his costly wars to "re-capture" the Western Roman empire. It had the effect of instead wiping out most of the population of the Western empire, and bankrupt the treasury leaving nothing for his predecessors to try and maintain what had been "gained". The wars also brought upon the plaque which wiped out half of the entire population of the empire. This had a dramatic and huge impact on the future of the empire.

One can click on each of the emperor busts and it will take them to Wikipedia for some more background information.
Posted by MONTANVS at 9:12 PM 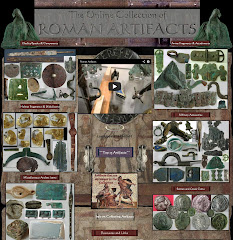